Back to Table of Contents

Notes on Matthias, the Immigrant

Now we go on to the First Generation of American Bergers. The father of the Berger Brothers was Mathias Berger, an immigrant. He spent the first 29 years of his life in Deidesheim, Pfalz (i.e., the Rhine-Palatinate area) and his occupation was listed in emigration records as a winzer, or winegrower.

Locating the German origin of our immigrant Berger ancestors was a major milestone in my research. I had previously known that Mathias and Martha were married in Deidesheim, and was able to connect them to that town through circumstances and church records. But I lacked strong cross-verification that these were our own same Mathias and Martha, until just very recently – in fact, not until 2019, while refreshing my research for this blog. The cross-verification finally came in a receipt found in the Mathias’s probate file: an invoice and receipt for a tombstone with directions for the inscription to include the birth date of August 7, 1807. 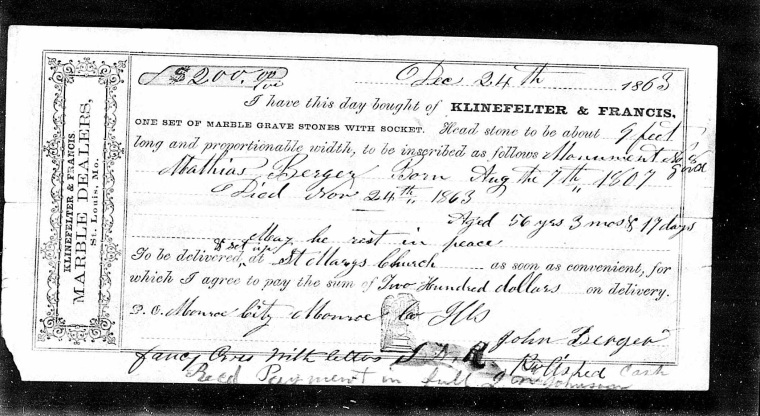 A crucial detail I previously overlooked: a tombstone receipt buried in a multiple page probate file.

I had seen the probate records but never actually read this receipt more closely until recently. The estate was managed by Mathias’s children. And since there were so many children and family members, the likelihood of someone messing up the date on the tombstone seems extremely low; thus, I rate the value of this as evidence for proof of birthdate as being very high. Armed with this information, I looked up that timeframe within the Deidesheim kirchenbuchen (church books), and located an entry for a baptism for a Mathias that took place just 10 days later, on August 17, 1807.

This connection sealed the deal! I thought I had previously found the European origins of our line of Bergers, but now I was able to solidify the answer.

We will have to await for whomever has the opportunity to research Mathias’s life in Germany to understand what kind of life he lived there.  One question: why did he come?  Well, it’s not something we can fully look at here, because it’s so vast of a subject that is heavily studied: German immigration to the US was so long ago, and the migrants have now had so many descendants that millions of Americans today descend from the thousands that arrived here in the 18th and 19th centuries and those millions have been busy researching their roots and the causes of emigration. But, in Mathias’s case it’s hard to identify a specific “push factor” (such as religious persecution or famine) causing them to flee their homeland, as, say, we can do in the case of our Irish ancestors who fled the potato famine. Based on my rudimentary understanding of the history, things had actually improved for German peasants after the French Revolution and the Napoleon era; i.e., I don’t think that most from Pfalz were facing starvation or severe religious persecution at this particular time. However, the Bavarian authorities, who took over from France in 1816 after Napoleon’s defeat, apparently acted oppressively, raising taxes and engaging in censorship. This pattern, also in an era of increasing general enlightenment, eventually inspired bands of citizens to hold a large, 3-day demonstration, dubbed the “Hambach Festival”, at Hambach Castle, located in the village of Neustadt, which is just several miles south of Deidesheim on the Weinstrasse.[1] The Hambach Festival took place in 1832, just four years before Mathias Berger’s notice of emigration. At that time, many would be afraid the young men in their families would be drafted to fight in territorial wars, and general oppression. That could be both economically as well as emotionally devastating. But for our Bergers,  it seems to have been more of a “pull factor” of greater opportunity in America. Germans were also enticed by popular books that glorified the German immigrant’s life in America.[2]

Most German immigrants were not landholders back in the old country, and this was their opportunity to own their own. Mathias acquired several large plots of land and became prosperous; such would not have been the case in his ancestral land. The US Government, implementing the Manifest Destiny (discussed in previous chapters), not only welcomed German immigrants, but encouraged them to come and do the hard tilling and taming of the landscape. Hard labor was needed to convert the natural lands to growing croplands, and German farmers were perfect for that job.

We can find an emigration notice for Mathias that was published in a local newspaper before Mathias left his home town:

The above is an emigration notice published in local news journal in Speyer, a small city near Deidesheim. Supplement to the Official and Intelligence Page of the Rhine District, No. 51, Speyer, 6 May 1836, Emigration notices Publ. 29 April 1836. It’s basically a public notice listing names of individuals intending to emigrate to America, and announcing that if there are any claims against these people, the claims need to be filed four weeks. One of the names on the list is “Mathäus Berger, Winzer (winegrower)” from Deidesheim, “with family”.

He was probably the Mathias who passenger records show arrived at New Orleans in March, 1937. He came with his wife, Martha Andress; sadly, the passenger list also shows they were travelling a 2 year old son named Johan who died on the trip.[3] 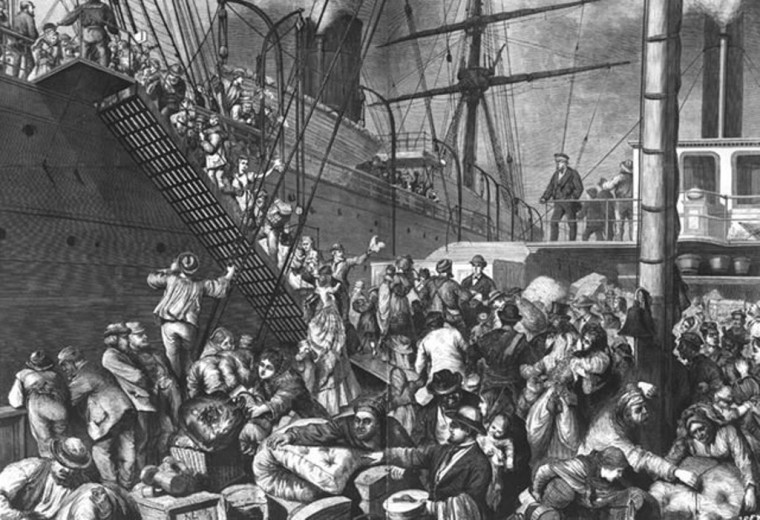 I don’t know on what kind of ship Mathias and Martha sailed, but steamships were already becoming common in the mid-19th century, and I understand earlier models included sails for cross-ocean voyages. Here is a late 19th century depiction of German immigrants in Hamburg boarding a steamship to come to America, published in Harper’s Weekly, (New York) November 7, 1874 (wikimedia commons [4]

By 1839 Mathias had moved to Monroe County, Illinois (a county that is along the Mississippi River and just south of St. Louis). There, he acquired a lower-cost farming land grant for 80 acres. I have not done extensive research, but it’s evident from what I can glean from the records that Mathias’s father and at least a few of his brothers may have joined him, along with several in-laws and cousins, all moving to Monroe County and surrounding counties within the span of a few years.[5]

Matthias became involved in the project to develop the Madonnaville Church to serve the German Catholic immigrant community. Sometimes he and Martha were recorded with the English versions of their names (Matthew instead of Mathias Berger, and Martha Andrews or Andrew instead of her native German Andress or Andres). 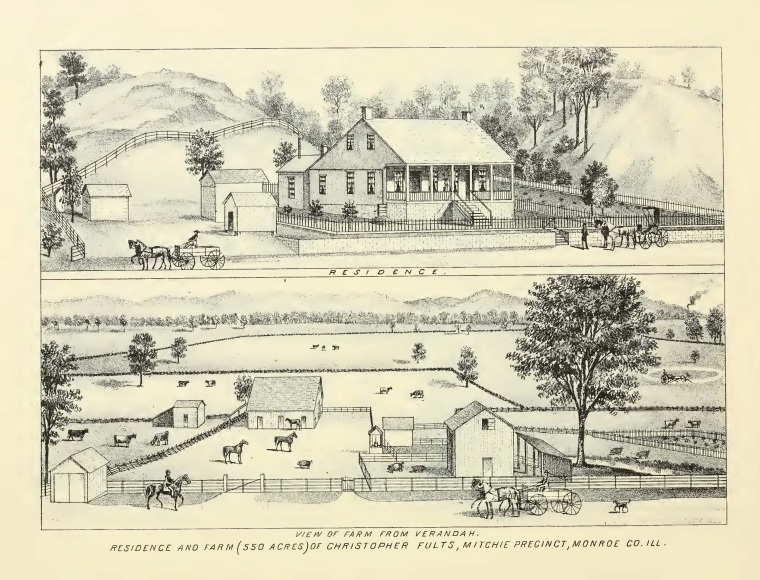 1894 Depiction of the residence and farm of a wealthy farmer in the Mitchie area of Monroe County – this would not have been far from the homestead and farms of Mathias Berger, albeit the drawing is from 3 decades after he died. (From the Combined History of Randolph Monroe and Perry Counties (available on Google Books).

Mathias must have been a very successful farmer. Over the next nearly quarter of a century, he would grow his landholdings multiple times in acreage. He died young (just under 56) – and without further information about long-term health problems or cancer, I am going to guess from something like the flu. This kind of end to his expansive little empire would have come as a shock to his family and the community.

Mathias’s probate record from 1864, listing sales of items from his estate, shows he had a large and diversified farming enterprise. Larger crops seem to have been wheat and oats. But he evidently also had other crops and produce. He owned several pieces of large farm machinery as well as scores of farm tools, a bunch of farm animals, and a wide range of equipment for making wine and cider (and sizeable stocks of those, too). And it looks like all or most of his childr 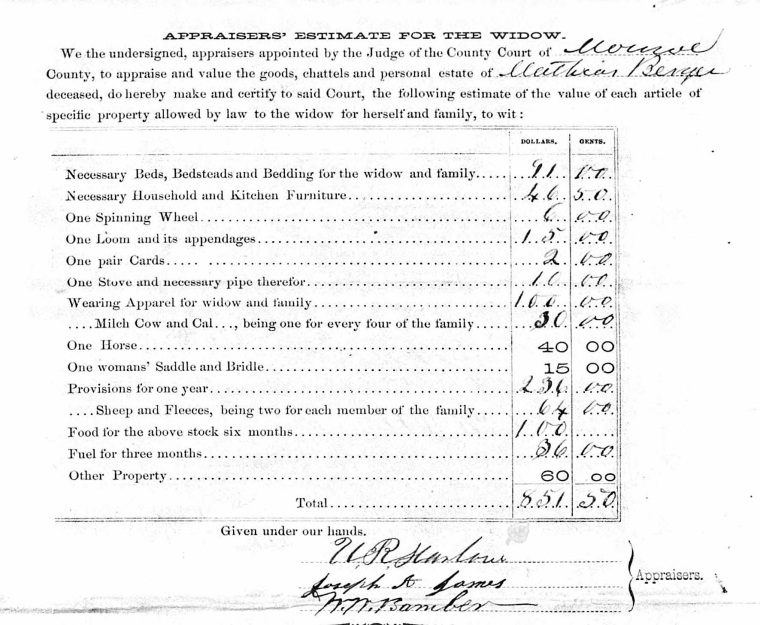 en inherited something from the estate.

Appraiser Estimate for Widow – financial summary of what Martha Andress received from the estate of Matthias Berger, from his Probate File (1864). I haven’t researched, but assume she also received a life estate to their house. She died c. 1873.

I will steal this opportunity to point out something genealogists rarely discuss when analyzing their ancestors’ land acquisitions: let’s be direct: these immigrants arrived to not only feed their families, but also to make money. They came to rip the native vegetation out of the ground, wipe out the brush and scrub habitat, drain the wetlands, chop down what little patches of native forest dotted the prairies, and intentionally cause a severe and widespread adverse impact on the biological diversity of the local native prairie and grasslands. Such behavior, which was not based on an environmentally sustainable practice, made a huge amount of sense to the crowds that arrived: it was considered good for progress.[6] We are today paying for those consequences, especially following the massive 20th century application of pesticides and fertilizers. (Okay, I will step off of the soapbox.)

[1]        Lots can be found on this event; for starters, see  https://en.m.wikipedia.org/wiki/Hambach_Festival

[2]        For instance, in 1829, an author by the name of Gottfried Duden “published in Germany his idyllic account of the several years he spent as a settler in Missouri; so popular that it appeared in three editions, the book caused numerous Germans to leave for the New World.” See The Library of Congress summary, “Germans in America”, Chronology (https://www.loc.gov/rr/european/imde/germchro.html)

[5]       In 1883, the Combined History of Randolph Monroe and Perry Counties (available on Google Books), noted as follows:  “Among the later population of the precinct were a large number of German families, who settled here after the year 1840. In the vicinity of Madonnaville lived the Berger family on the Kraft place in section 18. Matthias, John, Sebastian, and Joseph Berger were the sons, only the last of whom is now residing in the county.”

[6]       In the 1883 book the Combined History of Randolph, Monroe and Perry County, supra, the authors described the environmental setting, including native plant life: “Many of the early species of the vegetable kingdom have changed and passed out of sight since the coming of the Anglo-Saxon. The ” buffalo grass,” which formerly grew only upon the prairies, and the high pampas grass, have become extinct and given place to blue grass and other varieties sown and cultivated by the present tillers of the soil. The plants are many and rare, peculiar to this climate and latitude. Among the most important for medical purposes we find the boneset, ginseng, Colombo, pennyroyal, pink-root, Indian turnip, sarsaparilla, and other varieties too numerous to mention. The native plants of beauty are the lily, phlox, golden rod, eye-bright gerardia, asclepias, and hundreds more which adorn the meadows and flower-gardens of this section of the Prairie State. Beside these, there are the climbing vines, which fill the forest with beautiful festoons of artistic form, such as the woodbine, grape, clematis, bitter-sweet, etc. The trees and grasses, however, engage the special attention of the traveler.”

BACK TO TABLE OF CONTENTS